Yamaha has long been known as one of the best guitar makers in the business and has decades of experience delivering the goods that players want and need.

The Yamaha FG830 Solid Top Folk Guitar is a fine example of what has made the company’s guitars so popular for so long.

The FG Series, to which the 830 belongs, were the most popular acoustic guitars on Earth at one time and that, alone says a lot about just how much Yamaha has on the ball.

Yamaha’s manufacturing process has changed a few times since the FG guitars were first brought to market in the mid-1960s.

These days, FG guitars are made with a combination of old-school guitar building know-how and cutting-edge robotic technology. 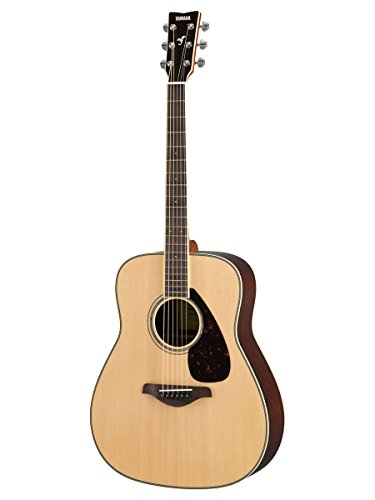 At first glance, the FG830 appears to be a normal entry-level flattop acoustic guitar, but there's more here than meets the eye!

Just listen! And tune in for our complete Yamaha Fg830 Review!

The FG830 is a Dreadnought-sized guitar, which is the most common and popular type of acoustic among most pickers.

The 830 is built around a solid Sitka Spruce top.

Sitka Spruce is one of the best-possible tonewoods for the top of an acoustic, and this feature sets this Yamaha apart from many of its peers.

Rosewood is used for the back and sides and is a classic and upscale choice for a guitar in this price range.

Thanks to cutting-edge acoustic analysis technology developed by the Yamaha R&D Team, these woods have been put together with an optimized scalloped bracing system that was developed using analysis and simulation rather than tradition. This creates a guitar with a straight acoustic sound that can compete with much more expensive instruments.

It’s balanced and warm, with an improved bass and midrange response that’s much more pleasing than older FG guitars could ever hope to be.

The neck is made of Nato Wood and is topped with a Rosewood fingerboard.

It also sports a slim, comfortable shape, rounded fret edges and a non-sticky satin finish that your hand will love.

Dependable die-cast tuners do their thing on the headstock, and the strings are pinned into a Rosewood bridge on the other end.

Together, this body and neck conspire to make a big sound that projects well and will serve nicely in any playing or recording situation.

When viewed and heard as a whole, there’s nothing that looks or sounds cheap on this guitar.

It looks to be a much higher-line instrument than it is, which is good for you.

Fit and finish are both excellent all the way around, and this is a guitar built to be played for a long time.

Both tone and tactile response from the FG830 are well above average.

The sound is warm and complex, thanks to the new bracing, and will appeal to beginner and expert players, alike.

The neck is slim and fast, not like those giant bluegrass necks of the old days, and this type of modern playability makes life easier for any guitar student.

String spacing is a little tighter than normal, however, but feels good after spending some quality time with the 830.

The body is comfortable for most adult-sized people and puts out a lot more sound than you’d expect.

More experienced guitarists will enjoy the microphone-friendly tones of the FG830 and will probably wonder why they ever thought they needed to track with anything else.

Pros will also like the ‘grab and go’ factor of this ax because it sounds more expensive than it is and, as such, is suitable for performing and recording anywhere their gigs may take them.

Players who are accustomed to playing smaller Concert or Parlor-sized guitars may need a little time to adapt to the larger Dreadnought body, but the tonal payoff is worth every moment of it.

Dreads project and boom in a way that small guitars can’t compete with and this bigger sound is precisely why they were created.

It’s the Dreadnought’s larger top that make this magic happen.

The Yamaha FG830 has many features that make it a winner and a solid choice for guitar players at any level who need a high-quality and affordable steel-string acoustic.

Yamaha, as a brand, is known for excellent musical products and the price-to-playability ratio is quite high with the FG830.

It’s built with a level of craftsmanship that rivals much more spendy guitars and beginners and experts will both be impressed with what this guitar adds to their musical lives.

The Sitka Spruce and Rosewood combination that drives the 830 is a time-tested pairing and will consistently give users the tones they’re seeking.

The best part of the FG830 is its affordability.

This makes it a super ax for a new player and will get anyone’s guitar career off and running with no bank-breaking at all.

The only strike against the FG830 is the fact that no electronics of any kind are included.

Adding a pickup to an acoustic guitar isn’t a big deal, though, and can be done by any local repair person.

Should You Buy One?

The Yamaha FG830 is an amazing value in an entry-level guitar.

It's better than entry-level when judged on tone and playability, but its price makes it an instrument that new players should take seriously.

It’s also a good step up for anyone who has already begun playing on a lesser ax.

The FG830 even has its place in the collections of working guitarists because of its high degree of utility.

Guitar players tend to be a traditional bunch, but the Yamaha FG830 is one instrument that's benefited greatly from a 21st Century method of production.

The results of our Yamaha Fg830 Review are in:

If you’re in the market for an acoustic guitar, you owe yourself a test drive on one of these.

See you again soon with another truckload of guitar information to help keep you rocking!