When it comes to American acoustic guitars, Martin and Taylor are the big kids on the block.

Both companies produce highly-regarded instruments that express their unique visions of what an acoustic guitar is supposed to be.

Martin represents the Old Guard in American guitar making, opening up shop before the Civil War, and has created many innovative designs that are now industry standard, like the Dreadnaught body.

Taylor is the new ax in town, coming to prominence in the late 20th Century, and makes a more modern type of guitar with its own innovations in design and electronics.

Today, we’re meeting up to do a general Martin vs Taylor comparison that’ll help you understand the history and intention behind each firm and their instruments.

Today, the company is run by C. F. Martin IV in Nazareth, Pennsylvania and has been family-owned for six generations.

That’s a pretty amazing accomplishment, and Martin has made it happen by maintaining high standards of quality and by always being on the leading edge of guitar design.

The now-classic Martin designs like the D-18, D-28 and D-35 Dreadnaught guitars were technological breakthroughs in their era and gave players more volume and projection than they’d ever had.

Those guitars are still made today, but Martin also offers many more forward-thinking instruments these days that address the needs of modern players and performers while still giving up the gorgeous tones that have always defined the company.

Taylor Guitars was founded by Bob Taylor and Kurt Listug in 1974 and is headquartered in El Cajon, California.

Taylor made its mark by combining state-of-the-art methods of manufacturing with a craftsman’s eye for detail.

The resulting guitars are some of the best-sounding and easiest-playing acoustic instruments ever made.

Taylor led the industry by using computer mills, lasers and other high-tech wonders to change the way guitars are made.

Now, Bob Taylor is recognized as the main visionary of the acoustic guitar world and his many contributions to the instrument include the patented Taylor Neck, the Expression System 2 pickup scheme and the T5, which is the world’s first true hybrid acoustic/electric guitar.

Taylor has also become a leader in wood sourcing and environmental sustainability initiatives.

The sound of an acoustic guitar is a very subjective thing and one player’s “warm” is another player’s “muddy.”

That being said, both Martin and Taylor guitars are excellent-sounding instruments and have done much to define the sound of an acoustic guitar in their respective eras.

Martin tends to be the tonal benchmark in the acoustic game due to its long history and to the many landmark recordings done on its guitars.

The company has used Spruce tops, Rosewood and Mahogany bodies and its innovative bracing design to create instruments that are warm, clear and distinctive.

The Martin D-28 of any period is considered the quintessential steel-string acoustic guitar by a large portion of the world and one listen to just about any bluegrass record will show you why. 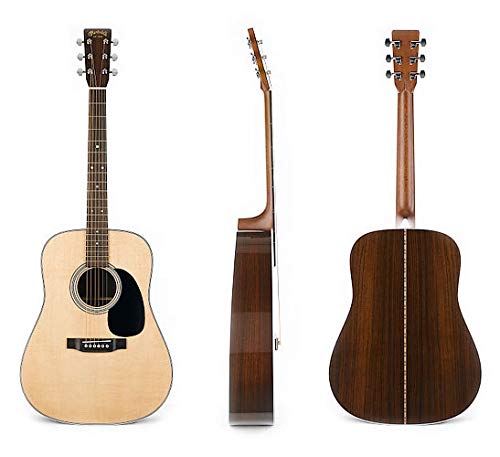 A great 28 has a loud, projecting sound with tight low frequencies and highs that are sweet, never brittle.

As a culture, it’s the acoustic guitar sound we’re most accustomed to hearing.

Taylor instruments come from an entirely different era and the concept of acoustic guitar design and, thusly, have their unique voice.

While Martin defines the large Dreadnaught body sound, Taylor’s most famous guitars, like the 414ce, are smaller-bodied Grand Concert and Auditorium-sized instruments that aren’t quite as loud as their peers from Pennsylvania.

The Taylor tone is crisp, defined and even.

It’s come to embody the sound of a more modern acoustic guitar that isn’t necessarily meant to be a bluegrass cannon like a D-28.

It’s become a favorite of present-day singer/songwriters for the way it supports their vocals without ever becoming overwhelming.

It has less bass to it, due to the smaller body size, but is still toneful and smooth.

Of course, Taylor makes Dreadnaught and Jumbo guitars, too, but it’s the firm’s smaller bodies that have become its most visible face.

Here’s a fun clip comparing some Martin and Taylor tones!

Attempting to decide which guitar brand is better for one particular style of playing or another is a bit of a fool’s errand, as both are capable of amazing music in any genre when placed in the proper hands.

Generally speaking, smaller guitars such as Taylor’s Grand Symphony and Grand Concert tend to find favor with pickless players because their smaller tops take less physical energy to get vibrating.

This means your picking fingers don’t need to work as hard as they would with a larger guitar.

Martin’s smaller 00 and 000-sized guitars are more likely to be found in the clutches of fingerstyle folks than its mighty Dreads for the same reason.

Having stated the above, the typical Taylor has a slight edge over the typical Martin for fingerpicking, at least to most people.

Martin Dreadnaught guitars were created to be the biggest, loudest strumming and flatpicking instruments around back in the Golden Era and still have a chokehold on that space today.

A D-28 will keep getting louder as you hit it harder and is an incredible thing to hear and experience.

Whether vintage or new, a D-28 lets a strumming player speak with an authority that a smaller guitar simply can’t match, especially with a high-action bluegrass setup that lets the strings ring out.

Taylor guitars are good choices for those who sing while they strum because of their less overpowering sound.

They compress more as you hit them and won’t get louder past a certain point of exertion.

Only you can decide which one is best for you but, in the flyover, Martin wins the Battle of the Plastic Pick.

Martin vs. Taylor: The Neck

Taylor has built a large reputation for being among the easiest-to-play acoustic guitars out there because of its proprietary ideas about how a guitar should feel.

Taylor necks are well-liked by players who want an acoustic with a slimmer neck that’s more like their electric guitars than the archetypal baseball bat necks found on many of the classic pre-war flattops.

Those old-school Martin necks of the 1930s were primarily intended for the first and second position playing styles of American roots music, and the size of the neck gave the guitar more tone and projection.

Overall, Taylor gets the nod in the Neck Department, especially for acoustic lead players who use the entire fingerboard.

Both companies make really small models intended for students, travel or players who just like the feel of a downsized instrument.

The Little Martin is a cool guitar that packs a lot of fun into a small package.

It’s built to a 23-inch scale and features a Sitka Spruce top and High-Pressure Laminate, or HPL, back and sides.

The use of this sort of synthetic material is becoming more and more common in the guitar business due to its cost and sustainability.

Ed Sheeran is probably the most visible user of the Little Martin, and the popular singer/songwriter even has three of his own signature models of it.

Taylor’s entry in the small strumming space is the Baby Taylor. 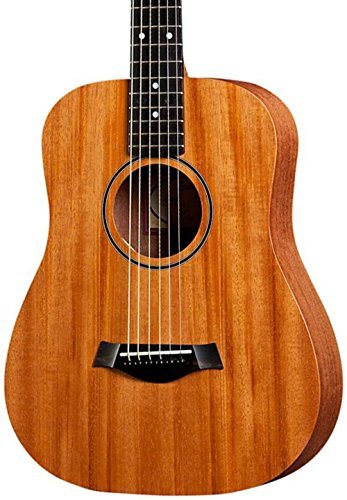 It’s a ¾ -sized Dreadnaught with a 22.75-inch scale, a Sitka Spruce top and layered Sapele wood back and sides.

It puts out more volume than you’d expect from such a diminutive ax and the tone will make you smile.

The Baby Taylor is a fine guitar for kids to take lessons on but has also been used by renowned artists like Bono and Taylor Swift, so you know there’s nothing it can’t do.

If you’re looking to get one of these little tykes, the big decision you have to make is if you prefer the HPL body of the Little Martin or the laminated Sapele back and sides of the Baby Taylor.

Both work well and sound good, which makes both guitars pretty even in terms of value.

You make the call!

Amplifying an acoustic guitar is a task that can be done any number of ways and Martin and Taylor each has its own idea about how to get it done.

Fishman is one of the most famous names in amplifying acoustic instruments of all sorts and can always be counted on to give users exceptional tone.

The Aura uses cutting-edge technology to capture the natural sound of an acoustic guitar with studio microphone quality.

Fishman has been the choice of countless professional and amateur players for decades and is a good choice to get that great Martin tone to the people out front.

Taylor goes its own way when it comes to electronics by using its proprietary Expression System 2 which uses a trio of specially positioned and calibrated pickups behind the guitar’s saddle.

This allows for the widest dynamic range of any available pickup system.

When combined with Taylor’s custom preamp, the Expression System 2 creates a flat-out amazing acoustic sound that makes you a winner when plugged into any type of PA system, recording software or acoustic amp.

You really need to hear it to fully understand how cool it is.

The Expression System 2 is a technological marvel that makes getting a sweet and natural plugged-in sound easier than ever before.

Martin vs. Taylor: What About Gibson?

Gibson is the other longtime maker of American acoustic guitars that, for some reason, often gets overlooked in favor of Martin and Taylor.

That’s really kind of a shame because Gibson acoustics were used to make some of the most significant music of the 20th Century and still have their fans today.

We frequently get so caught up with Gibson’s iconic electric guitars like the Les Paul, Flying V, SG, and ES-335 that we forget the Gibson flattops behind many of rock and country music’s greatest moments.

Influential players of all eras ranging from Roy Smeck to Emmylou Harris to John Lennon have employed Gibson acoustics successfully and have become identified with the brand.

The Gibson tone is on the darker side, traditionally, and has been eternally popular with country and Americana artists.

The same can be said of the styling of many classic Gibson models.

There’s something about a Dove, Hummingbird or J-200 that just screams “country star.”

Like Martin, Gibson makes more modern guitars now with the necks, cutaways, and electronics today’s players demand but will always be more famous for its designs of the 1920s through the 1960s.

Just like Fender and Gibson electrics, vintage Martin and Gibson acoustics helped shape our idea of what flattop guitars should look and sound like, and they’ve both left indelible marks on guitar culture.

Even though we’re mostly discussing Martin and Taylor guitars today, anyone hunting for a serious new acoustic should make the time to comparison shop a few Gibsons.

The big G just might be the sound you’ve been missing.

I hope you’ve had fun reading this article about Martin vs. Taylor guitars and feel better informed about the basic differences between these important guitar brands.

Remember, all guitars aren’t for everyone, and you should trust your ears, hands, and gut about which instrument is best for your needs.

See you here again soon with another dose of guitar knowledge!